All on four method is used in patients with toothless jaws or where there is a certain number of teeth still left in the jaws, but extremely parodontid or for some other reason cannot be used to create a fixed prosthesis. In those cases, they have to be removed which results in toothless jaws.  It can be applied to both upper and lower jaw. 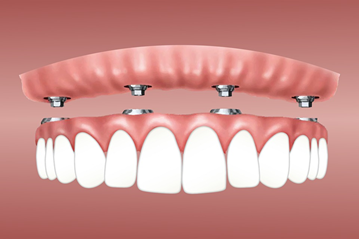 All on four, true to its name, implies placing a complete dental sequence in one jaw, on four implants. It is a fixed dental bridge, consisted of 12 teeth, that is fastened, with bolts, to the four implants and is thus fixed to the jaw which keeps it in the oral cavity permanently. The bridge can only be removed during regular dental check-ups. The dentist then separates it from the implant to perform professional hygiene, when the bridge is returned to the oral cavity and re-fixed to the implants. 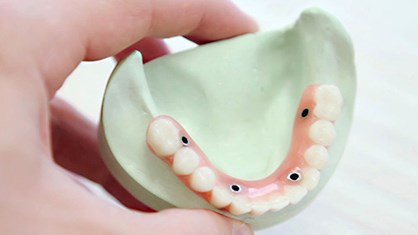 Basically, this is usually a compromising method of supplying the toothless jaws with fixed prosthetics on implants when there is not enough bone to insert a sufficient number of implants to create a classic dental bridge on the implants, and bone tissue augmentation and transplantation is not possible, or the patient does not want it.

All-on-Four methodology advantages – In comparison to the classic complete denture prosthesis, the advantage of All on four method is that it is fixed prosthetics, stable and it does not need to be taken out of the mouth the mouth like any fixed dental bridge.
It is also much more graceful than classic complete denture prosthesis and covers only the dental ridge. This is particularly visible in the upper

jaw because it does not cover the whole palate as complete denture prosthesis does. This preserves your sense of taste and touch and provides maximum comfort in your mouth.

Another advantage (in comparison to classic bridges on toothless jaws implants) is that a smaller number of implants are needed for All on four method and no bone replacement procedure is needed. This simplifies the procedure, speeds up the recovery of the patient and is commercially less demanding for the patient (note that it is always safer to go with a larger number of implants, if possible).

All on four method distinctiveness

In the case of toothless jaws, bone resorption (bone loss) is more significant in the molar area, while in the premolar area the bone usually remains sufficiently preserved for implant placement.

Further distinctiveness of this method is that implants are placed at a certain angle in premolar and front molar area. The lack of bone in the rear jaw segment is thus compensated, resulting in high implant firmness and resistance to the chewing pressure.

Immediately after surgery, implants placed this way can be burdened with temporary fixed prosthetics consisted of all 12 teeth (needed for normal chew system functioning) and of top aesthetics. Three months from implant placement, the permanent prosthetics are placed. 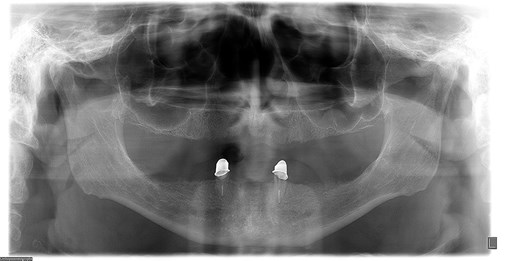 Teeth in one day - Using All on four method, in the same day and under local anaesthesia, we painlessly remove the remaining prosthetically useless teeth or residual roots, if present. Subsequently, we proceed with the placement of four implants into the toothless jaws and, immediately afterwards, create fixed prosthetics containing all the teeth and fix it to placed implants. Concurrently, on the same visit (if necessary), we also produce a model of the dental ridge for proper alignment of permanent fixed prosthetics. 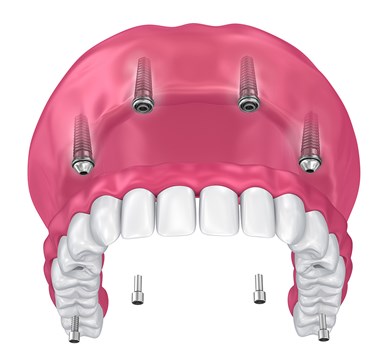 The two front implants are mounted vertically to the second left and right molar position, and two rear implants are placed at a 45-degree angle and exit the bone in the fifth tooth area, on each side of the jaw.
Temporary acrylic teeth (a type of biocompatible plastic material for temporary teeth production) are created immediately after the implant placement. 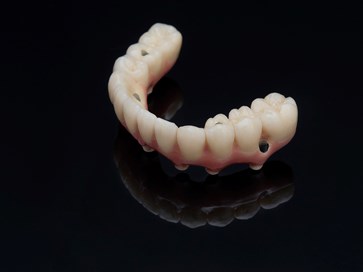 Zircon ceramics are the material of choice in today's top aesthetic dentistry.

All on six methods is fixed prosthetics with all the teeth, placed and fixed on 6 implants in toothless jaw bones. Unlike All on four method, in All on six method, besides 4 implants in the premolar area, 2 additional implants are placed in the molar area, one implant on each side.
Subsequent procedure for creating temporary and permanent prosthetics is the same as in All on four method.

All on six method should always be given precedence. As more implants as possible should be placed in front and rear end of the toothless jaw.

Placing as much implants as possible allow a more accurate chewing pressure distribution and significantly lower load on single implants. All this affects implant durability and significantly reduces the risk of implant loss. 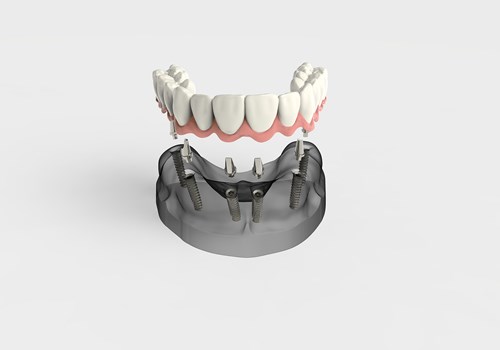